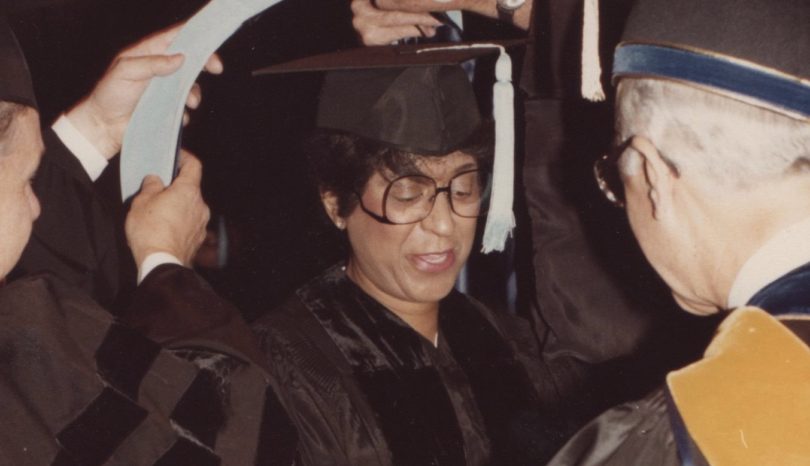 Can’t nobody tell me anything about my grandma. I didn’t have the fortune of knowing her as long as others, but I did live with her more than half my life and I think that counts for something. No, I didn’t see all the sides of her, the ways she clashed and crashed with others, but I suspect those pieces are part of what made her who she was. A headstrong, defiant woman who took nothing less than what she deserved. A woman who loved so hard it hurt, but also loved honestly.

When my grandmother passed I was terrified to speak at her funeral. I felt like I had so much to say, yet none of which I could articulate or felt comfortable sharing. I’m in a different place now, so this, right now, is almost like writing her eulogy.

My grandma had a big old bed and the biggest room I’ve ever seen. Her bed was a giant king made of two separate twin XL mattresses. I spent a lot of time on the right mattress enjoying her company. I remember eating ridiculous amounts of crawfish and spilling ink on my first attempt at calligraphy. I remember watching the early morning soap operas and talking to her about my greatest fear. Time has made a mess of my memory, but I would guess that we had this talk when I was between 10 and 14 years old – before things started to change.

I asked her if she feared death and she said, “No.” There was nothing she could do about death, so why fear it? I flipped that answer over in my mind, trying to understand, but shuddering every time the night got too quiet and empty. I couldn’t accept it then and doubted it would get easier with time, so I asked her how long she’d felt that way. She told me she’d always been cool with death. I resented her answer, knowing that I was already further away from reconciling myself with death than she had ever been. But that was her way. Never saying what you wanted to hear, simply what she felt.

I hope my grandma knows I considered her my best friend. I just remember her always being there, even when she wasn’t all the way there. She took me on my first plane ride. She helped me get into a better school system. She scolded me when I didn’t come straight home from school. She picked me up when I got sick. She let me practice driving to Maroon 5. And then I started to lose her.

She didn’t show up simply because she couldn’t. Her mind was preoccupied with lack – my grandfather’s passing, then unnecessary light or noise or some other thing she couldn’t control. Eventually, when she talked about death, she talked about it like a friend that scorned her. Why didn’t it come for her?

Sometimes she was as cool as an ocean. And other times she cried dry tears. I couldn’t console her or help her take care of herself. In fact, I, too, was preoccupied. I was moving on to college, trying to figure out my life like I thought everybody else already had. So, my mother took up the battle. I’m in awe of both women. My grandmother had to be cleaned, fed, monitored, and re-cleaned. Keeping her mind engaged was just too much of a battle – forces inside her had greater resources at their disposal. When my grandma and I talked it was about seeing me graduate, and then wondering why she felt so confused. My only relief is that she never forgot me.

My brother says the day she saw me walk across the stage at my college graduation, she had more clarity than she had had in some time. She’d always valued a good education and how far it could take you, so much so that her doctorate was in Education and she became a superintendent. I’d like to think I made her proud by crossing that stage at 19 with highest honors. I’d also like to think she held on for me, but that I didn’t make her wait too long – I completed my college career in three years and she passed the fall after I received my degree.

Though my grandmother had wandered away from me, she wasn’t entirely gone until that day. She’d recently checked into the hospital, but she had been in and out of the hospital several times at that point. I thought she was headed home that day. I guess in a way she was.

My grandmother left a lot in shambles, but who can blame her. The last years of her life were in shambles, too, and I take care not to forget that. In fact, two years after her death I took up the fight to end Alzheimer’s, partly because I refuse to forget, and partly because I need to make a difference. I don’t want anyone else to live through dementia, as a sufferer, caregiver, or family member. I fight for a day when you can transition on this Earth more you than you’ve ever been.

I’m starting to pick up the pieces my grandmother left behind. I naturally inherited her height and perhaps some of her intelligence, but some of my favorite parts of my personality, I borrowed from her, too. My grandmother had giant mirrors everywhere: around her bed, next to her bed, at the front door. Today my mom teases me for my vanity, but I prefer to think that my grandmother and I just learned to be deeply in love with ourselves.

My grandmother went after what she wanted: degrees, a family with two kids, a big house. She didn’t settle for anything that didn’t make her happy. It sounds selfish, but it allowed her to enrich the lives of so many others. Those in the school districts she led, her family, me. Today I pursue my own happiness so I’m a stronger, better person when I need to be there for others.

My grandmother deeply valued education and I chased after high marks like they were a lifeline. After my Bachelor’s Degree, I didn’t continue my formal education in the way she had, but I found another path to continue learning and help others learn from me.

At least once a week you can find me wearing a necklace my grandfather bought her. It’s a small rectangle with her name on one side and a date on the other. If I lost it, I’d probably sob for days because it’s one of the few physical things of hers I’ve refused to let go of. I’ve had it cleaned and repaired, and I’ve actively decided whether I should wear it depending on where I was headed.

But if I happened to lose it at least I’d still have “Europa” by Gato Barbieri, Victor from “The Young and the Restless,” Richard Gere’s face, a small body with big feet, a hunger to surpass everyone’s expectations, and more blessings I can count thanks to everything she’s done for me.

If you feel moved to help me honor my grandmother, please make a donation to the Walk to End Alzheimer’s at http://act.alz.org/site/TR?px=8714535&fr_id=10673&pg=personal. I walk for the 5th time less than a week from today.