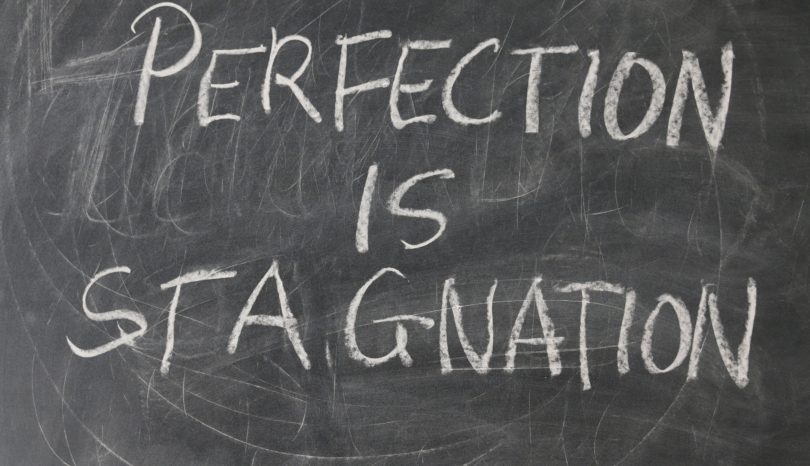 Perfection is the enemy of progress. I wrote this on my wall of things to remember in 2017 because that was a hard lesson in 2016. Perfection is evil. Perfection is that thing that drags you down before you even get started. It says, “No, more thinking must be done,” and gets in the way of action. Perfection can have you hating your life over something you don’t even care about. Perfection is a bitch.

Last year I set a few goals too many. Eat better, save money, make money, blah blah blah. The loftiest of my goals were “read 52 books” and “exercise 5 times a week.” Somehow I started crushing my reading goal (maybe because I actually enjoy reading), but I failed continually at my exercise goal. As snow started falling, it got really bad. If I even thought of the acronym DOMS, I took a day off. If I got sick, I took a week off. And when the days got shorter and I just didn’t feel like getting up in the dark, I didn’t, repeatedly.

Now read that again, and tell me what’s wrong with it. It says nothing about what I did accomplish. I didn’t gain weight or lose muscle. I never stopped exercising. I didn’t quit. And when I had to make healthy choices, like skipping that Large Fry at McDonald’s that I love to the depths of my soul, I did (most of the time). If the worse thing I did was aim closer to 200 than 260 workouts last year, then I’m pretty fucking fantastic. If my goal was to be perfect then I could exercise 5 times a week, never see a gain in my life, and still be satisfied. But no, my goal was to make exercise a priority and I did.

I wish I could remember where I found this other quote so I could make another point, but the general idea is you waste a lot of time and miss out on a lot of returns by striving for perfection. Sometimes you just have to dive in or take the good enough approach.

I was talking to my coworker while she agonized about something she was writing and I laughed because I knew that despite how perfect she made it, her supervisor was going to mark it left, right, up, and down. Some people won’t even let you think you’re perfect because they want you to know you have “room for growth.” Sometimes perfect is just an intangible ceiling that you’re meant to strive for, but never actually achieve.

When I think “progress over perfection” it gives new meaning to a lot of things. It means don’t deny yourself a job opportunity just because you don’t have every single job qualification listed. Don’t give up exercising because you fell off the bandwagon for a while and haven’t put a new game plan in motion. Failing forward means that if you have to stop, then take a break and get back to it. Don’t think you’re not making progress with that insane workout just because the girl in the video can do one handed push ups and your arms give out after one knee push up (besides, I heard they take breaks and just make it look like it was recorded in one take). For my job, sometimes I have to record myself speaking, but since it’s not an audiobook and people aren’t dishing out the big bucks to enjoy it, I can afford to stumble over a word every once in a while. I might do more than one take, though, to see if I can do it better. Better, not perfect.

Imagine the peace of mind you’ll have at the end of the day when you realize you don’t have to do be perfect. And that you don’t have to do anything that doesn’t make you happy. Being perfect never made anyone happy, but taking steps toward improving your life almost always has.  Focus your energy on what matters – I promise it’ll be more than enough.