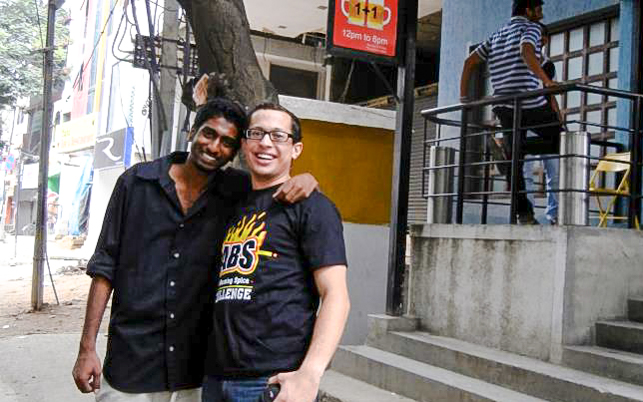 I had just finished an internship in Uganda and was maximizing my trip to the other side of the world by taking my college friend, Jayanti, up on a longstanding offer to visit her hometown in India. About halfway through my week visiting I accidentally ingested a whole green chili pepper while eating lunch in the home of Jayanti’s family. It sounds ridiculous, but I thought the green chili pepper was a green bean as I shoveled a forkful of a vegetable medley into my mouth. As any foreigner in India would, I expected to eat spicy food while there. I had even looked forward to it. However, this unexpected encounter with such a high concentration of capsaicin led to a few moments of shock and scare and then lots of laughter.

Later that day Jayanti and I recounted the chili pepper story to some of her friends. I played it cool and acted as if the heat of the pepper wasn’t a big deal, that it was merely just shock from eating a hot pepper unexpectedly. Then, as a way to backup my big shot spicy-things-don’t-bother-me demeanor, I told a story of mine of when I successfully completed a BW3’s hot wing challenge back home. One of Jayanti’s friends recommended that if I like hot foods and challenges so much that I take on the ABS challenge at a local pub called PlanB. With a bit of uncertainty, he said it was “something like a half dozen ghost chili pepper wings in like ten minutes.” Based on that description it was game on. No matter how hot the wings were, I knew I could finish six wings in ten minutes with no problem. I had my sights on a photo of my foreign face standing out amongst the locals on the PlanB wall of fame.

Jayanti and her mother were not excited by the prospects of their guest being ill on their watch and warned me against doing the challenge. I was too determined to heed the advice. Wanting me to experience Bangalore as I had wished, Jayanti reluctantly took me to PlanB to take on the ABS challenge.

Upon arrival at the pub, I found very few faces on the wall of fame and countless faces on the wall of shame. So many that the entire hallway leading to the restroom and the walls of the restroom itself were full of polaroids of past failures. It turned out that the challenge wasn’t to eat a half dozen wings. It was to eat a whole dozen. And, the time limit was not ten minutes. It was four minutes! Three ghost chili pepper wings per minute with no drink. To top it all off, the wings were to be served piping hot. Like ten times McDonald’s hot coffee hot. Not to mention, I found out that ABS meant Ass Burning Spice.

There was no way. I felt sick before touching a single wing but I was not going to back down.

After a bit of a hullabaloo over my request to take on the challenge, I was served papers to sign over any right to sue in case of illness, blindness, and death. The ghost chili pepper, otherwise known as Bhut Jolokia, was at that time believed to be the hottest pepper in the world.

About fifteen minutes after I signed away my rights the wings were served and the challenge began. Three bowls sat before me, two full of wings and one for bone disposal. An employee stood to my right holding a timer that was kept in my view at all times. The pub owner stood watching adjacent to me wearing a maniacal smile. The wings were intimidating. They were served so hot that the light above and around them was distorted by the heat from the wings mixing with the cooler but not really cool southern India summer air. Each wing was covered in a quarter inch of chili paste and seeds so dark red that they looked black.

I finished three wings within the first forty seconds. I had set a great pace but had already started feeling the effects. It took no time for blisters to form in my mouth and on my finger tips. Each trail of sweat was a river of lava ripping through my skin to forge a path. Even my tears and snot burned. Every ten seconds or so my stomach felt as if it were being stabbed repeatedly.

Exactly at the two minute mark, I finished my sixth wing. I was halfway through the wings and halfway through the time. I was aware that it took me twice as long to finish my second set of three as it did my first. My pace was trending towards failure. It was a manifestation of my mental state. With the pains magnifying each passing second, I had long since given up at eating all twelve in four minutes. My new goal was to not quit.

At that two minute mark, I reached for a napkin to wipe my face quickly before continuing on with the second half. As I reached to my left for the napkin, an unfamiliar hand pushed my hand back towards the wings, grabbed a handful of napkins, and wiped my face for me. From that same direction, a male Indian voice shouted words of encouragement. That same voice then started shouting for the attention of the entire pub. He rowdied the crowd and within moments every patron of the pub surrounded me clapping and cheering. Uplifted, the tone of my internal dialogue quickly changed. The unfamiliar hand continued to wipe my face as I reset to my original goal.

If you happen to find yourself on the quarter mile long Castle Street near the center of Bangalore, India, take a moment to stop into the gastropub PlanB on the west end of the street. If you look closely at the photos on the wall you’ll see a polaroid photo with my face on it. It’s not one of my better photos. In fact, it’s probably one of my worst. If I remember correctly, I look sickly and distressed in that photo. Nonetheless, that photo of me has great significance. It hangs on PlanB’s wall of fame as a testament to my bravery, stupidity, and the encouragement of a stranger.

Drinking Curds and Whey to ease the stomach pain 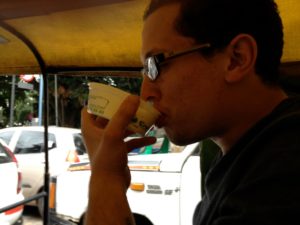 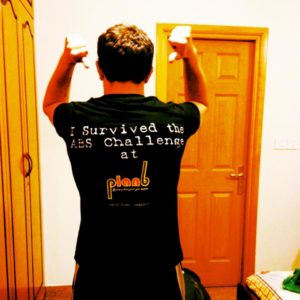