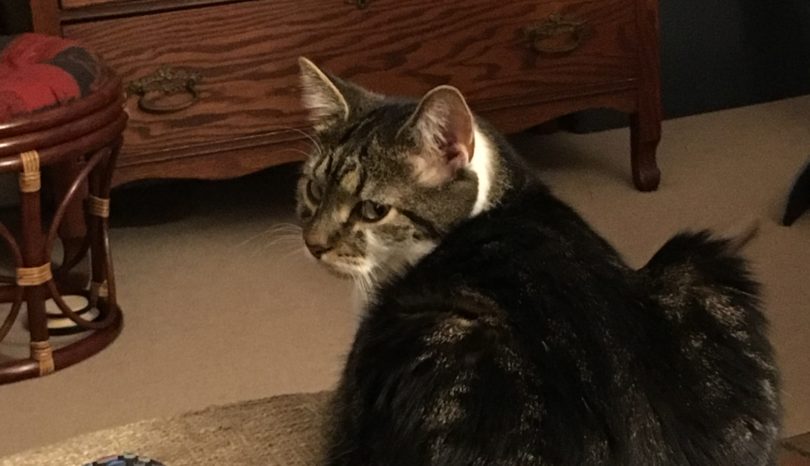 Despite being subjected to a pair of fur-covered roommates who generally took advantage of my high-strung nature, my life with Henry and Albie wasn’t all bad. In fact, they actually contributed to some legitimate chuckles over the course their stay.

For example, this exchange took place during a phone call with my father, who’s clearly great at names:
Me: One of the dumb cats is chasing his own tail.
Dad: Is it Herman?
Me: DAD there is no cat named Herman.
Dad: Ah, what is it…Harold?
Me: Hahahahaha NO.
Dad: Uh…[voices in background, obviously my mom helping him out while also mocking him] ohhh, Henry! Oh, I knew that.
Me: *eyeroll* Okay, Dad.

Then there was the realization that even in my sleep, there was no getting away from the cats: when I wake up each morning, I don’t typically recall the content of my dreams—or whether I dreamed at all, for that matter. Every now and then, though, I’ll remember a pretty vivid nightmare, most of which include guns or weird scenarios of violence. Interestingly, the scariest nightmare I’ve had since the cats moved in involved Henry creeping into an inaccessible cranny between two pieces of furniture so he could pee on my carpet but I couldn’t reach him to pull him out. I woke up from that one with beads of sweat forming on my forehead as I anxiously scanned my apartment until I located both cats. Thankfully, neither of them was using my carpet as a litter box.

While I never had an interest in owning cats, some tiny part of me has always liked the idea of becoming a dog owner. One day, that part of me decided to find out how dog-like these felines could become: I was going to train them to do tricks! My plan was to start by getting Henry and Albie to high-five me with their front paws, then progress to walking on leashes so we could take regular strolls around the neighborhood. While this may not come as a shock, my plan fizzled before we even progressed to the leash stage. At their best, my attempts to get high-fived by cats ended with me lifting the judgmental-looking felines’ front paws into the air; at their worst, they resulted in some minor scratches on my hand for making the cats move without rewarding them with treats. Looking back at that brief period of ambition, I’m not sure why I expected so much of the boys. Shoot, Albie doesn’t even respond to his own name.

Finally, there was a single evening during my period of cat ownership when I felt inclined to actually curl up on my couch with them. Embracing that unusually-cuddly instinct, I picked up Henry and plopped him onto my lap so I could pet him. Henry responded to my affection by stabbing me in the thigh with his claws until I let go and he could sprint away. Thanks for putting me in my place, sir.

1 thought on “I Am Not A Cat Lady: Paws-itively Hilarious.”