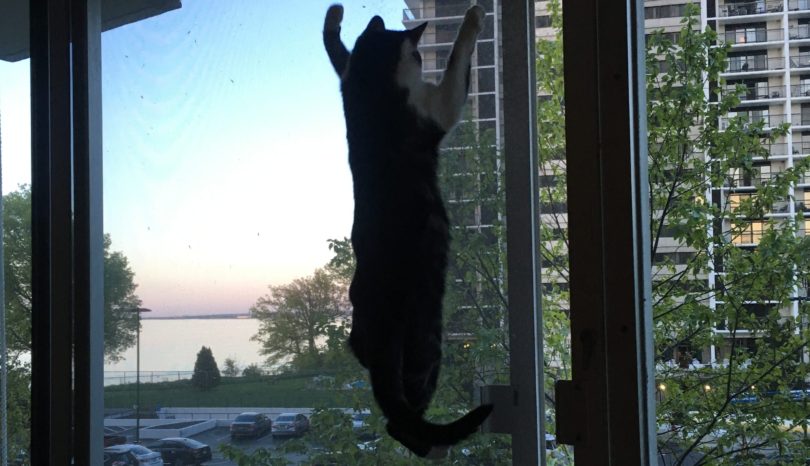 My first Friday night with the cats began in a fashion that was quickly becoming familiar: just as I was on the verge of zonking out, I sensed something approaching, my heart started thumping…and sure enough, a furry paw poked my face, causing me to let out an alarmed gasp. I don’t remember if it was Henry or Albie who provided the first wake-up call that night; I do, however, remember that once I removed the first perpetrator (purr-petrator? Sorry, I couldn’t resist) and started dozing off, the other stealthily lept onto my bed to provide another scare. Tired and flustered, I moved cat #2 from the bed to the floor and tried to get some sleep…but the cycle began again. And again. And again.

I eventually realized that multiple hours of attempted cat removal had passed, but I hadn’t slept at all. My brain simply couldn’t rest with the knowledge that Henry or Albie might quietly jump into my bed at any minute.

So what new solution did I come up with in my exhausted mental state? Sleep with the lights on! Brilliant, right?

After turning on my bedside lamp, I actually believed that the time had come for me to successfully sleep: I could clearly see the cats coming, so the element of surprise was removed. Despite being well-lit, though, my apartment still offered no way for me to stop the cats from getting in my face.

When Albie approached me for what felt like the millionth time, I finally hit my breaking point. As I plopped him onto the floor, I started crying and asking him, “Why can’t you leave me alone??” Instead of answering the question, he decided to sprint across my apartment to a large window (the one with the screen that, in his mind, was there to serve as a super-climbable wall). That prompted me to sit straight up in bed, tears still in my eyes, and demand his attention by bellowing, “ALBIE. DON’T YOU DARE.” He turned to me for a second and started directly into my eyes—it’s as if he was saying, “Make me. I dare you.” Then, in the ultimate show of defiance, he leapt onto the screen and started climbing all the way to the top of the window. I, in response, started sobbing.

The rest of that night (or morning, by that point) was a blur of tears, tiredness, and very little sleep. There’s a happy ending, though: it took a few more weeks, but I eventually adjusted to nightlife with cats. I can now get a solid night of shut-eye despite the knowledge that four-legged creatures are roaming my apartment. On an even happier note, I slept like a baby on the Saturday after The Bad Night. It was as if the universe had witnessed my struggles from the night before and decided, “Okay, this girl is clearly on the verge of insanity. Let’s throw her a bone.” When I finally woke up that next morning, Henry and Albie were both perched on the cat tree, fast asleep.

A beam of sunlight was even peeking through my blinds and casting an angelic, golden glow on the little demons. I couldn’t help but laugh.