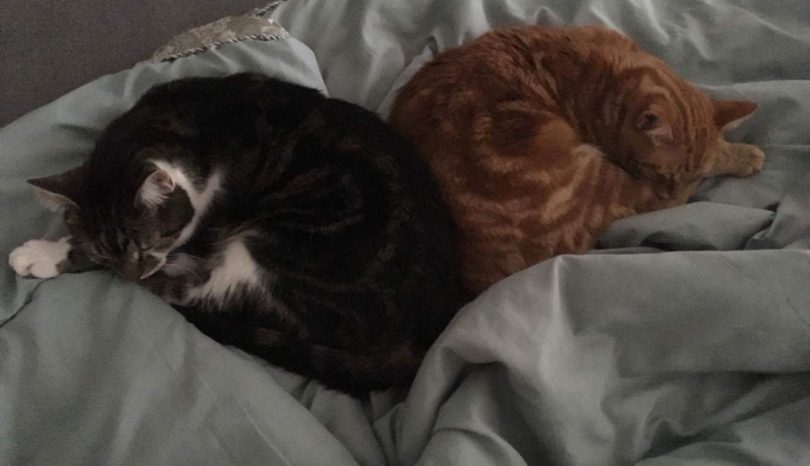 It didn’t take me too long to get used to having cats around during the day: sure, they were pretty rude house guests who almost immediately started trying to eat my dinner on a regular basis, but at least I saw them coming and could react accordingly.

The nights, however, were a different story.

I previously mentioned that, unlike my sister, I had no interest in Henry and Albie sleeping in my bed. That lack of interest was largely rooted in the fact that I am a very, very jumpy person. I couldn’t tell you why, but I scare incredibly easily. Friends, roommates, and co-workers periodically take advantage of this in hilarious ways. However, it was a lot more terrifying when the cats were the ones doing the scaring.

Their first night in my apartment was pretty good: Henry had not yet gotten used to me and had barely even worked up the courage to emerge from his under-the-bed hiding spot, so he avoided me completely. Albie woke me up twice when he tried to pet my hair, but before I even had time to test out my sister’s spray bottle suggestion, he decided I wasn’t worth the effort and let me go back to sleep. While it was a startling way to wake up, it at least didn’t prevent me from getting a decent night’s rest.

On the second night, sleep was more of a struggle. Henry decided that we could be friends after all, so as his first offering of friendship, he really, really wanted to smell my face. Had he done this during the day, I might have found it adorable; instead, he showed his affection at night by quietly jumping into my bed, creeping up next to my head, and starting to sniff until I woke up, startled. Not wanting to be outdone, Albie also orchestrated a few sneak attacks, all of which ended with him creeping at the head of my bed and contributing to my less-than-decent slumber. That night, I spritzed the cats with water each time they woke me up; the cats retreated when splashed, but they looked more eager to inspect the spray bottle than run away when it was used. That didn’t feel promising.

As the week continued, the spray bottle became 100% worthless. Both cats decided that startling me awake to invade my personal space bubble was absolutely worth a little splash of water. I started thinking about and experimenting with other ways to get through the cat-infested nights, but nothing worked: when I covered the bed with tin foil during the day to make it seem less appealing, Albie just tried to eat the tin foil. When I turned off the nature noises app that I usually fall asleep to, I learned that even dead silence didn’t improve my ability to hear–and not be startled by–the cats’ approach. When I spent extra time playing with Henry and Albie in an attempt to tire them out, it seemed to have the opposite effect and instead give them endless energy at night. The only pseudo-solution was physically removing the cats from the bed when they woke me up; however, it required way more effort than I wanted to exert during the wee hours of the morning. It also did nothing to guarantee that the cats wouldn’t come back as soon as I had moved them from my bed to the floor.

Along with being crappy in terms of sleep, that week happened to be especially rough from a work perspective. By the time I was leaving the office on Friday evening, I was frustrated, exhausted, and wanting nothing more than a solid night’s sleep where I could wake up as slowly as I wanted on Saturday morning.

As you might have guessed, the cats had different plans. Theirs involved making that Friday night the low point of my cat-sitting career.