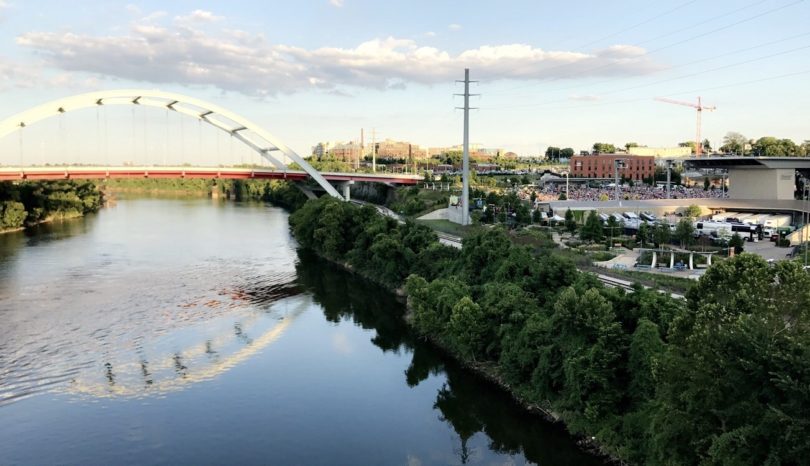 Here’s something you may not know about me–I love music like crazy. I love music so much I got it tatted on me in kanji (because ‘music’ doesn’t look as pretty in English). If I wasn’t so shy, I might have attempted to become a singer, but I am, so you could only catch me in the soprano section of the school choir.

Sometimes I can be picky about what I listen to, but that’s because there’s a mood for everything. There’s The Life of Pablo to get you hype on your morning commute, there’s anything Trey Songz for date nights, and there’s Petey Pablo and Juicy J for nights when you want to get crunk. I’m typically a Hip-Hop and R&B head, but I’ve fallen for “The Geek in the Pink,” “Sail,” and “D-I-V-O-R-C-E” because you miss out on a lot when you stay boxed in. As a result, my excitement at visiting The Country Music Capital, Nashville, TN, wasn’t at an all-time high, but I love music enough to give it a try. The words that sold me were, “live music everywhere.”

The Music City showed me a good time. I had one night to soak in as much as possible, and it was life-changing. I hopped in the car for an adventure that took me downtown to water, stadiums, and bars galore. My friend and I walked down the water bank to the pedestrian bridge to soak in Nashville at once. From there we could see another bridge’s reflection almost perfectly in the water, as well as the concert that drew hoards of ticket-peddlers and pedestrians with collapsible chairs.

After marveling at the view, we chased down the famed Broadway, where all the bars thrummed from the sound of guitars, drums, and violins. Did I mention that this was a Tuesday? At first glance, the street reminded me of Vegas, with lots of giant lit signs and activity, but it’s much shorter, which means my friend and I got to get a feel for each bar before hunger drove us indoors.

We landed at Tin Roof. The musician performing was Chris Shrader, and he played a bunch of cover songs only my friend recognized, but that I found myself jamming to. We settled in for food and drinks and began to marvel at how a single place could host and serve so many people who love music. We asked ourselves how many artists were playing for their career instead of just fun–Chris Shrader has a super catchy single on iTunes–and if our bartender was an artist, too–he was. Then, we created our own music city tour and hopped around the corner and down 2nd street.

We set off for the George Jones and its rooftop bar. The crowd was older, but the atmosphere was still dope. Lights were strung, the weather was perfect, and the singer was killing it with just an acoustic guitar. He even asked us where we were from and made small talk in the middle of his set.

We took that high further down 2nd until we happened upon a Coyote Ugly Saloon which is a no brainer when the night is young, you’ve had two drinks, and you’ve never been. The bartender there was the feistiest thing I’ve ever seen and you could tell she loved her job. She was a performer in her own right, and drew $30 out of my pocket,  convinced spectators to dance with her on the bar, and then later rode a skateboard across the bar on her belly. The energy there was so distracting that I lost my phone, but no worries, I recovered it after I got down the street and realized I couldn’t snapchat a band playing Michael Jackson.

With my phone in hand, we traveled to The Honky Tonk and a karaoke bar whose name I can’t recall, because we left as soon as we realized we’d have to hear an hour of bad songs before getting to sing “Don’t’cha by the Pussycat Dolls.”

We landed at another bar whose name I also can’t remember, but had just what we were looking for – more good music and beautiful men. Yep, that’s the bar where we met a group of Swiss guys with pornstaches and really cute smiles. We sang and danced even though they prefer techno and I prefer hip hop, and I just kept thinking, “Wow, a black girl and a Swiss guy meet at a bar in Nashville…” I stayed at that bar until 1AM, mere hours before my flight, but I have no regrets–it was all for the love of music.

For me, music tends to trigger memories. If someone even breathes, “boots with the fur” I think of middle school dances and Flo Rida. “It’s the thuggish thuggish bone” always makes me think of Hot Sauce Williams in Cleveland. And “There She Goes” by Babyface takes me back to my first car trip to Atlanta, GA. Now, the next time I hear classic rock or country music, I’ll picture dozens of musicians, a wicked energy, wild people from all over the globe, and an even wilder night.