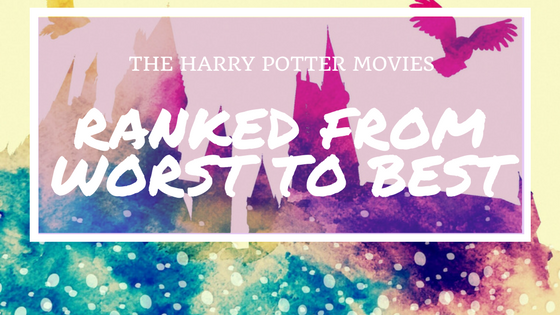 Two weeks ago I decided to re-watch all the Harry Potter movies. The television marathons I usually rely on have been notably absent and my withdrawals were too great to ignore. It was time to crack out the DVDs.

I spent 20 hours watching Daniel Radcliffe, building my trivia knowledge, and forgetting that I am a merely a muggle whose greatest problem is deciding what to eat for lunch. To round out my time in Harry Potter land, I’ve decided to create a list for you all – my personal list of the Harry Potter movies from least favorite to the absolute best in the world.

There are no bad Harry Potter movies. Just movies that are slightly less awesome than the rest. Movies where being an angsty teenage overshadows the thrill of facing death every year of your life in new and inventive ways.

I feel I must emphasize that this list is completely personal and based entirely on the whims of a twenty-something who habitually buys theater tickets based on the likelihood of seeing an attractive man. With that in mind, please enjoy.

8. Harry Potter and the Goblet of Fire

I know, this shocked me too. I used to enjoy watching the kiddos get all dressed up and conquer the battle against puberty, but suddenly I’m over it. As I age I begin to realize that Robert Pattinson isn’t, in fact, all that attractive and that Cedric Diggory’s death was probably the least climactic of all the deaths in all the Harry Potter movies – even less than the death of Harry’s owl, Hedwig. Voldemort finding his way into a body with no nose was the most exciting part of this movie. Booo.

It’s not this movie’s fault that everything we care about happens in the second part. However, I still reserve the right to hate watching our beloved characters endure the great emo phase of their teenage years. Except worse! Remember high school emo? Now add in the dead of winter, camping in the middle of nowhere, waiting to hear your family is dead, and the necklace of sadness. It’s too much. Also, this is the movie where they try really hard to set the stage for a Ron and Hemione romance…I don’t buy it!

6. Harry Potter and the Half-Blood Prince

I still chuckle when I think about Harry Potter on lucky juice. Slughorn: “Harry!” Harry: “Sir!” See, I just laughed out loud again. Then again, I still get pissed when I think about Ron dating that annoying blonde chick. (Such a pity she had to die in the final battle.) Personally, I was disturbed by Harry using that sectumsempra spell, even if he didn’t know what it was. You can’t just go around making people bleed out, especially when they’re kids dealing with major emotional crises like how to go from a teenage bully to a Dumbeldore killer. Harry Potter and Dumbledore both fell from grace in this movie.

5. Harry Potter and the Chamber of Secrets

Oh, Dobby. How we learned to love you. But oh how I hated you when you first appeared at Privet Drive. Still, this movie was pretty fun. Phoenixes flying around, students getting petrified, young, handsome Voldemort. Thrills throughout. Plus, there was major plot point here: the first horcrux!

4. Harry Potter and the Prisoner of Azkaban

Thank the magical realm for Sirius Black. He was rabid most of this movie, but it was awesome simply to see his face – we only have precious few moments with him after all. The timeline shift was a bit annoying (I expected the movie to end about 40 minutes earlier) but at least the Hippogriff survived. We must also pay homage to the moment Hermione punches Draco in the face and that scene where Harry Potter produces that kick-ass patronus.

Hedwig is dead. Mad Eye is dead. Dumbledore is dead. Fred, Remus, and Tonks die. Snape dies. Oh, and Harry Potter dies too! It’s basically the end of times, but  I still enjoyed the mess out of this movie. It was extremely satisfying watching our team finally make some progress on that horcrux hunt and make their way back to Hogwarts. And Snape’s redemption was absolutely EVERYTHING. I remember being in line at the bookstore back in the day and having to choose between two stickers: should we trust Snape or is he the absolute worst? I always knew he was the realest! Also, the fact that Harry ended up the “master of death” brought me great joy. (Thanks, Dumbledore!)

2. Harry Potter and the Order of the Phoenix

Back to Sirius Black. Harry Potter has family for a whole sixty seconds, but it still warms my heart. Harry’s all like, “hey Mrs. Weasley, I know you’re like a mother to me, but my godfather is standing there so I’m gonna ignore you while I hug away all the pain of 12 years of loneliness.” So adorable. And then Harry Potter takes badassery to a new level by sassing Professor Umbridge (“I must not tell lies”), defying the establishment, and teaching the most consistent Defense Against the Dark Arts course Hogwarts has seen in years. Lastly, Dumbledore. In his office. With the phoenix exit. So much swag!

BONUS: Remember that one time Harry Potter gets pissed at being ignored and yells at Dumbeldore? I love it.

1. Harry Potter and the Sorceror’s Stone

I picked the very first film as my favorite because it really is the most magical. Maybe it’s because of the joy I get from watching Hagrid wreak havoc on the Dursley’s and help Harry make a major come-up. Maybe it feels that way because it takes me back to when I was ten years old and wishing I could get a letter from Hogwarts. Maybe it’s simply because they’re all so young that it takes you back to simpler times. When all you wanted was to make the team or win the pizza party. I will probably always enjoy watching this movie first for the same reasons I weep for my childhood.

2 thoughts on “The Harry Potter Movies Ranked from Worst to Best.”