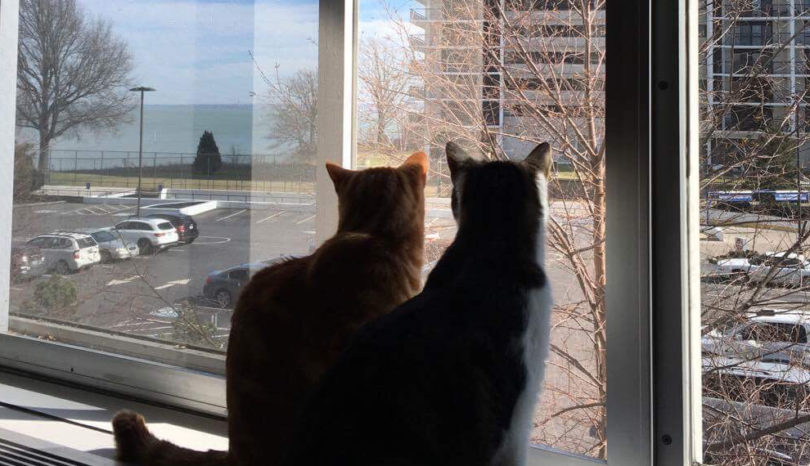 After about six months away, my sister returned home, found some wonderful roommates who don’t mind cohabitating with cats, and finally made plans to move Henry and Albie into their new abode. In the days leading up to her return, I became more and more excited about restarting my cat-free existence.

Oh, and about seeing my sister again. Obviously.

I wasn’t alone in my excitement, either—I could tell that the cats were just as ready to get rid of me. Henry, for example, had taken to regularly meowing at my apartment door. It was as if he convinced himself that I was keeping the bigger, better part of my apartment from him. (Sorry, dude—this is as good as it gets.)

Then there was Albie, who apparently grew bored of waking me up by petting my head in the early morning hours. Instead, he started trying to one-up himself with new wake up calls, like dousing his head in water (from his water bowl or my leaky faucet, I assume…that better not have been toilet water) and then headbutting me, or literally sitting on my face. All that nonsense actually made me miss the head-petting.

The actual move-out day was a bit of a production. My sister came to the apartment one evening, armed with a pair of cardboard pet carriers. She greeted the boys, lovingly pet them for the first time in ages, scolded me for not brushing them enough, and finally set to work on moving them into the carriers. Albie was easy; we threw some treats into his carrier, and that was enough for the genius to allow himself to be placed inside without even the slightest resistance. Henry, however, was a little more intelligent and a lot more difficult. We tried lifting him into his treat-filled container, but as soon as he got close to being placed inside, he dug his claws into the cardboard panels on the top to stop us from lowering him any further. We then turned it into a two-person job: I opened the top panels as widely as possible, and my sister lifted Henry. However, Henry kept fighting, and I kept chickening out and abandoning my post as his claws got closer to my flesh. My sister and I tried switching roles, but even after six months, my cat-holding skills were awkward, at best; as a result, Henry kept jumping out of my arms before I even got him within three feet of the carrier’s opening.

After lots of yelling, stressing, and somewhat-successfully avoiding scratches, we gave up on the carrier. Instead, my sister strapped on Henry’s leash and walked (carried) him down to her car. It wasn’t exactly a smooth operation, but the fact that Henry and Albie were off to their new home with their cat lady mother made for a happy ending to the day.

And me? I was thrilled. My apartment was back to being MY apartment, and I could sleep soundly without fear of roommates creeping in the night. A cat-owning friend of mine was stunned to hear about my lack of emotional reaction to the cats’ departure, as well as my non-interest in getting some furballs of my own; her exact words were, “I can’t believe you haven’t fallen in love with them!!!”

I will say this, though: the first time I visited my sister’s new house, I noticed Henry slowly approaching from another room. Despite our last interaction being the struggle of moving him into a pet carrier, I stuck out my hand to greet him. After several seconds of cautious sniffing, I think he remembered me. He then rested his hand in my outstretched hand and let me pet him for a minute. And my heart melted a little.

I guess you could say that—in addition to lessons about playing in the sink, avoiding duct tape, not being dead, and exactly how high-strung I can be—Henry and Albie taught me that cats are alright…as long as I’m just a cat aunt with visitation privileges.

NOT a cat lady.