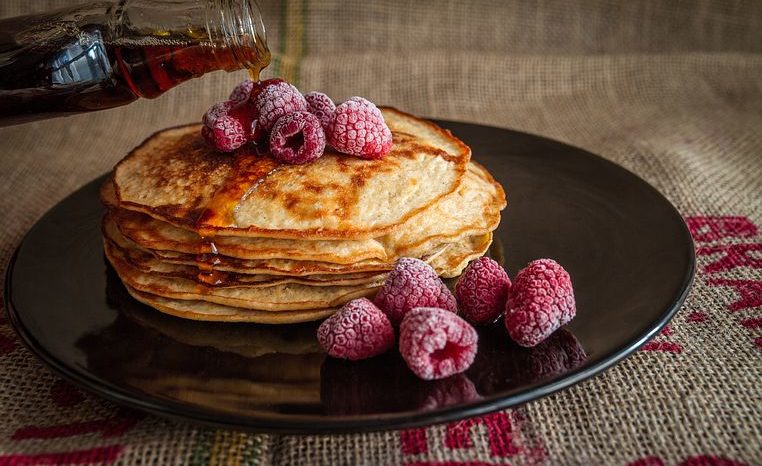 We can pretty much universally agree that fear is deconstructive. That it holds you back from achieving great things, that it’s counter to all the possibilities that the Universe actually has built for you. We strive to be courageous and think past fear. To leap when there’s nothing but air underneath us, to take a risk in the stock market, to fall in love. But more often than not, we don’t realize the most basic ways that we can be afraid.

I’m guilty of this. I have a tattooed reminder that I have no reason to fear anything, but I’ve always worried about applying fearlessness to something really big. Big like new business venture big or traveling to foreign countries big. Or something really obvious. Like arachnophobia or acrophobia. If I could just stare down enough spiders or enough tall buildings or speaking engagements, I would be the master of my fear. Then, I realized I am afraid of cooking.

I remember the first time I tried to make my own pancakes. I had bought one of those containers that says, just add water and pour, and I thought, “I cannot screw this up.” Now, I have a history of finding ways to screw up complicated things, such as adding too much water to a cake that I was making from scratch, and less complicated things, like baking a piece of bread in the oven and setting it on fire. Cooking pancakes definitely errs on the safe side of things. So I get home, I get a skillet out, add my water to the container, shake, and begin pouring small rounds of pancakes. The initial pour was solid. The shape was mostly circular and the bubbles I was told to expect were appearing. When I went to flip the first pancake, all was well. It may have been slightly blonde, but that was better than being slightly black, so I allowed myself to feel good about it. I pulled up a couple more mini pancakes, and then poured my next round of pancakes.

These went through a similar process, but when I went to flip the pancakes I realized the heat wasn’t distributed evenly. My mind was able to pinpoint the problem, but not how I could fix it. To make matters worse, I tried to estimate the time I should wait before flipping the pancake, but what worked the first time didn’t work. The pancakes were cooking faster and ended up burnt on one or both sides. The third round was the worst round and ultimately I was left in tears. I had three good miniature cupcakes out of a breakfast I was planning to make for my family. I had wasted the entire container of add-water-and-pour pancakes and had nothing to show for it. The good pancakes were cold by the time I dried my tears, so even they were not worth salvaging my pride.

All this was of course, over pancakes.

Since that time I have not attempted to make pancakes, and only now, two years later am I able to joke about it. I told one of my brothers the story, and he laughed at me before admitting that he’s messed up cooking other foods in his day. He also said that’s the only way he learned to cook things correctly. Honestly, until that moment, I hadn’t considered that there are people out there making mediocre meals over and over again, just slowly getting better and better. I thought cooking should be like math, you follow the formula and you get the right answer. And maybe it is like math, but with a shit ton more variables than I was taught to account for. My brother even shared some pancake specific tips with me. I could try one of those skillets you plug in that heat evenly across the bottom. Or, if I used a skillet, I could take the skillet off the heat between rounds so it wouldn’t just keep getting hotter and hotter. I started to see possibilities.

I used to cook little meals in college for my roommates. I don’t think I was afraid of failing at cooking back then because college students with a diet based around toasted rolls and McDonald’s can hardly be tough critics of a home cooked meal. If my tilapia was too blackened, then poo-poo on them. It was free and I didn’t see them making anything better. Cooking in my mom’s kitchen was a slightly different story. I knew she knew had years of experience on my ass and she never hesitated to tell me when my work was subpar. My confidence plummeted and I started to fear trying.

Today, I have three reminders for myself. The first comes from ages of wisdom; the only way to guarantee failure is to never try. How brilliant is that little cliche? The only way to never accomplish something is to not do it, so you always fail unless you try. The second comes from Sagi, the Beachbody trainer responsible for Body Beast. He always says “fail forward” and that sticks with me. It’s a cooler way of saying, “don’t quit” because it acknowledges that you may have to actually press pause or take a break, but as long as you pick it back up, you’re moving forward. The last reminder comes from Gretchen Rubin’s The Happiness Project where she coins the simple phrase, “I enjoy the fun of failure.” It’s revolting, to say the least. It’s more than hard to stomach the idea of failing, but it’s a wonderful idea to affirm that failure goes hand in hand with growth and achievement, which is truly fun. Gretchen describes the number of times she failed before her book made it into my hands, and I felt warm and fuzzy inside. It’s only fun because she didn’t give up, and that motivates me to keep trying.

P.S. My second attempt was awesome. I even added strawberries and whipped cream to solidify the deliciousness.