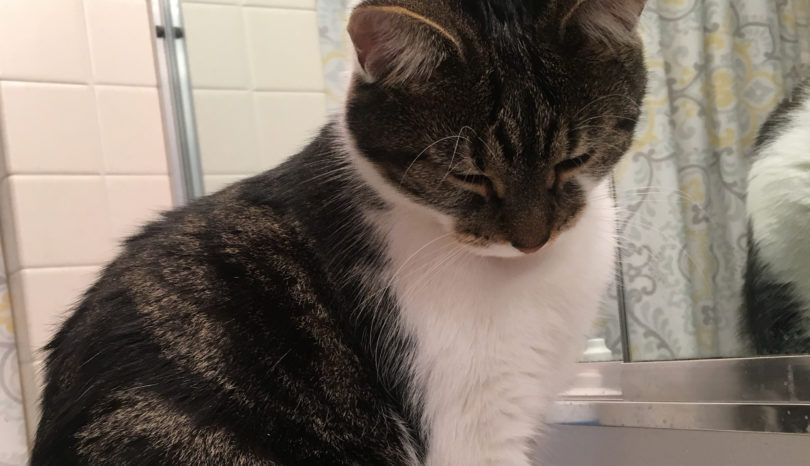 Along with countless lessons about cats, I also learned a decent amount about myself during my six months with Henry and Albie. Some of this new self-knowledge was positive (for example, I now know that I have progressed from “light sleeper” to “can sleep through some amount of cat-inflicted face-petting without waking up with a scream”); most, though, was not. For instance, I learned that if I ever acquire pets of my own, there’s a very good chance that I will be SUCH a nervous mess of a mother.

My anxious style as a pet parent actually caught me off-guard: in some of my earliest work experiences, I served as a babysitter, softball coach, and camp counselor. I generally enjoyed all of these roles, and despite the fact that they required me to be responsible for the lives of others, I don’t recall dealing with extreme levels of nervousness about it. However, my 5am panic attack over a sleeping Albie’s apparent “death” and a series of other over-the-top reactions proved to me that caring for felines brought a very different type of caretaker out of me.

For starters, I once caught Albie sitting in a corner on the floor. Albie rarely sat still for extended periods of time, so his choosing to do so on the ground instead of on the cat tree, my bed, or my couch sounded an alarm in my mind. I called him over to the other side of the apartment and even popped open the treat jar; neither prompted him to move, so my conclusion was that Albie had broken one of his legs when I wasn’t looking. After a couple dozen worry-filled seconds passed, he picked himself up and successfully lept onto my bed. His movement shouldn’t have surprised me…but alas, it did.

Then there was Henry’s attempted exploration of my apartment building’s hallway: I had just returned home from a marathon shopping session. My arms were loaded with grocery bags, so when I finally managed to unlock my door without spilling any of their carefully-packed contents, I was somewhat irritated to see Henry staring up at me in the doorway. Sure, it was cute that he was greeting me, but how was I supposed to open the door and squeeze through it with all of my bags while also preventing Henry from escaping into the hallway, then sprinting to who knows where? To mitigate my fear, a logical move might’ve been to carry the bags in smaller, more manageable batches; instead of doing that, I decided to power through the doorway while using the bags to barricade Henry inside the apartment. Not surprisingly, the curious cat was able to sneak past my groceries and set foot into the never-before-seen hallway. My immediate reaction was to loudly state, “Henry! Go back inside! You don’t live out here!” and try to figure out how I could usher him into the apartment without spilling any of my groceries; meanwhile, Henry just looked at me, mildly confused at my frazzled look. Not exactly the reaction I expected from him, but despite his apparent lack of interest in sprinting away from me, I still dropped the groceries in the hallway and snatched Henry off the ground as food began spilling out of the bags.

Most recently, there was the time that I held an on-again, off-again staring contest with Albie for the entire hour or so that I spent getting ready for work. When I initially made eye contact with him that morning, I noticed that he only had one eye open. Instead of accepting the knowledge that Albie was just waking up and, like humans, he was probably just having a slow morning where he wasn’t yet ready to stare down the world with both eyes, I grew concerned. I didn’t want to get too close to inspect his closed eye—my closeness would’ve resulted in more cat hair on the outfit that I had already meticulously lint-rolled—so I just watched him like a hawk. I continued to creep on Albie during breakfast, while I brushed my teeth, and as I finished packing my backpack for work; still, my intense staring was met with only a one-eyed glare. When he finally returned my gaze with two, wide-open eyes right before I had to leave, it became clear that nothing was wrong with his vision. When hit with this realization, I broke into a relief-filled happy dance.

All things considered, I blame my Nervous Nellie pet parenting on my lack of prior experience around cats. I had lived my share of skinned knees and temper tantrums, so whenever I saw kids of the human variety encounter these and other issues, I knew that they would be able to make it through. With creatures of the four-legged variety, though, I still have no clear idea of when I should go into crisis mode.