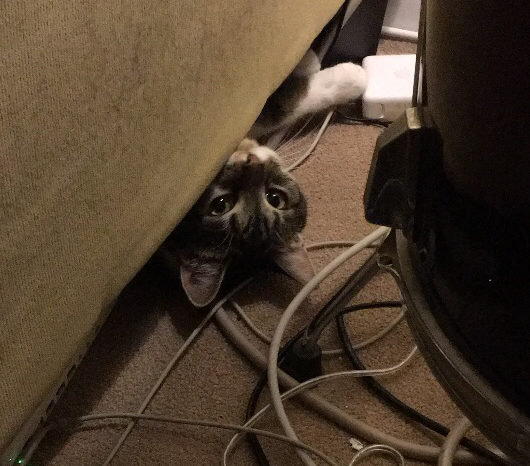 Cohabitating with Henry and Albie in a studio apartment had its share of challenges. As I’ve chronicled (read: complained about) over the last several weeks, there were very few opportunities to relax without being accosted by a curious cat. Given the close quarters, though, I figured that the one upside to the living arrangement was knowing that I would never lose track of the cats. After all, how many hiding places and potentially-dangerous crannies could 600 square feet possibly hold?

Henry and Albie were kind enough to answer my rhetorical question:

Under my convector unit: When the cats first moved in, a woman who works at my building’s reception desk (who, I’m fairly confident, would be proud to be classified as a cat lady) warned me about my apartment’s heating unit. Apparently, she knew that other cats throughout the building consistently tried to nestle themselves right underneath the convectors in an attempt to get as warm as possible. Since my convector lives in a nice little case that is perched less than half a foot above the ground, I didn’t expect this to be an issue. However, I learned that a cat seeking ridiculous levels of warmth does not let little details like minuscule crawl spaces and possible danger get in his way. After both Henry and Albie managed to cuddle up to the convector and prove the building receptionist right, I was forced to construct a temporary barrier of wooden slats and bricks to keep the cats from achieving such warmth again.

Top of the fridge: For months, I considered the top of my refrigerator to be a feline-free zone. I had never witnessed either of the boys trying to make the big leap from my low kitchen counters, so I started using it as another hiding spot for breakable items. Mason jars, coffee pots, and birthday gifts for upcoming parties were just some of the items that I stowed up there with confidence; if a cat had the ability to jump up there, I figured that I would’ve seen him try already! Knowing that, you can imagine my shock when one evening, I strolled into the kitchen for a snack, flipped on the light, and made eye contact with Henry…who had silently perched himself on top of the fridge. When our eyes met, he froze between a box of Cheerios and a coffee pot in a crouched position that made him look a bit like a large, furry log. He remained frozen as I asked him, “Why the heck are you up there?” and started debating whether I needed to remove any of my fridge-topping items before bribing him with a treat to come down. (To Henry’s credit, he WAS able to gracefully descend without breaking anything!)

Inside my (CLOSED) closet: Even though my clothes became hair-covered as soon as they left the closet, I was still vigilant about keeping my closet door shut. On the rare occasion that I wandered off to brush my teeth in the middle of picking out an outfit, I could scurry over to verify the door’s status within a nanosecond of noticing a cat in my peripheral vision. One morning, though, I clearly wasn’t quick enough. I was brushing my hair in the bathroom after completing the grueling task of selecting a good blouse/necklace pairing; that’s when I spotted Henry, who was sniffing the shoes that were piled at the bottom of my closet and visible behind the slightly-open door. I shooed him away, mentally facepalming myself for my carelessness, then shut the door completely before finishing the rest of my pre-work routine. However, when I was ready to leave the apartment, something felt off. Both Henry and Albie typically wandered over to investigate when I entered or exited our home. That morning, only Henry came to see me off…so where was Albie? I checked behind my shower curtain and under my dresser, then even went so far as to pop open the treat jar to try to draw him out of his hiding spot. Still, Albie didn’t come. As I scanned the room again, I halfheartedly decided to check the closet, even though I assumed that Albie would’ve started meowing if he had been trapped—but I clearly overestimated Albie’s instincts: sure enough, he looked up at me from inside my closet when I pulled open the door, giving me an expression that seemed to say, “Why are you bothering me?” That boy.

Underneath my couch: I was watching tv from my bed one night when all of a sudden, I heard some rustling next to my couch. I figured that one of the cats was messing around with a toy, but when I sat up to take a closer look, no cats were in sight. After a few more seconds of rustling but no obvious culprit, a paw reached out from underneath my couch and began batting at a power strip. The paw was soon followed by an upside-down Albie face—it was as if he was a mechanic rolling out from underneath the car that he had just finished repairing. Instead of a car, though, it was my couch, and instead of a spacious garage, he found himself in a power strip-adjacent spot on my apartment floor. After physically removing him from said spot and warning him that electrocuting himself would probably suck, I rolled my eyes and went back to watching tv.