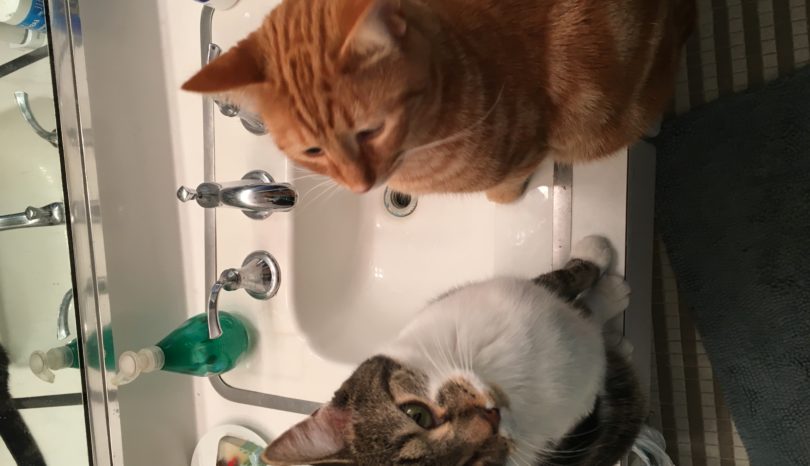 My time as a cat guardian taught me several good lessons. Sure, the most obvious one was that I’m even more high-strung than I ever realized I was; still, there were a few others that were almost as valuable…

Double stick tape is a win: It took a while, but Albie eventually discovered that he could step onto and stroll across the shelf that holds my tv. To his credit, he figured out how to awkwardly sidestep from my neighboring dresser onto the shelf—not the simplest of paths; as a result, though, I had to live with the risk that Albie would knock over my tv or block my view of the screen just as something dramatic was starting to happen on House Hunters International. Like any resourceful human would do, I asked Google to solve my problem for me. The top results for “what can I put on my furniture to keep cats away” were tin foil and double stick tape. Since I had already learned that foil hardly slowed Albie down, it seemed like tape was worth a try. After digging a few spare wooden slats out from under my bed, I completely coated them with double stick tape, positioned them in front of my tv, and plopped down on my couch to watch the experiment unfold. In no time at all, Albie jumped onto the dresser and tried to take his usual route onto the shelf…but the second that his paw touched the tape, he quickly pulled it back and stared at the shelf intently. He tried to put his paw down one more time, but again realized that the smooth finish had been replaced by something far stickier and less appealing. As he stared at the shelf, appalled, I laughed like a Scooby Doo villain.

White vinegar is an excellent carpet cleaner: Along with other lies and half-truths about them, my sister told me that the cats never threw up. One afternoon, Henry proved her wrong by presenting me with a lovely little pile of orange vomit on the carpet. After concluding that he wasn’t actually sick and was still acting like his normal self, I turned my attention to my carpet. Most people who know me know that cleaning tips and keeping a tidy household are not my strong suits; therefore, I again looked to Google to help me figure out how to get rid of the puke stain. A warm water-white vinegar combination caught my eye in the search results, so I created a mixture of the two and doused my carpet with it. Despite having to deal with a pretty strong smell for the next few hours (I might have gone a little overboard), the vinegar totally did the trick. Between discovering a cheap new method of stain-fighting and determining that Henry was going to be fine after his little incident, the day was a pretty big success.

The treat jar is a very valuable tool: While they rarely behaved in a manner that struck me as deserving of treats, my sister left me with a jar of treats for the cats that actually came in handy. It was a clip top canning jar that made a nice popping noise when it opened; the cats knew exactly what the popping sound meant, so if I ever needed them to immediately stop their mischief, all I had to do was open it. Don’t want the boys play-fighting with your laundry as it hangs drying in your apartment? Treat jar! Can’t find Henry after he dove under your bed when you whipped out the vacuum but want to make sure he doesn’t plan on staying under there all night? Treat jar! Need to coax Albie out from under the sink so that he doesn’t start trying to eat dish soap and garbage? Treat jar!

Cats shed like it’s their job—so BUY ALL OF THE LINT ROLLERS: I kept my clothes safely hidden behind closet doors and in drawers after Henry and Albie arrived. Still, I somehow managed to become coated in cat hair almost as soon as I got dressed every morning—how did they do that to me?! All I know is that, to remove their shedding from my clothes, I went through more lint rollers than I ever thought I’d need. Seriously. So much cat hair. Gahh.