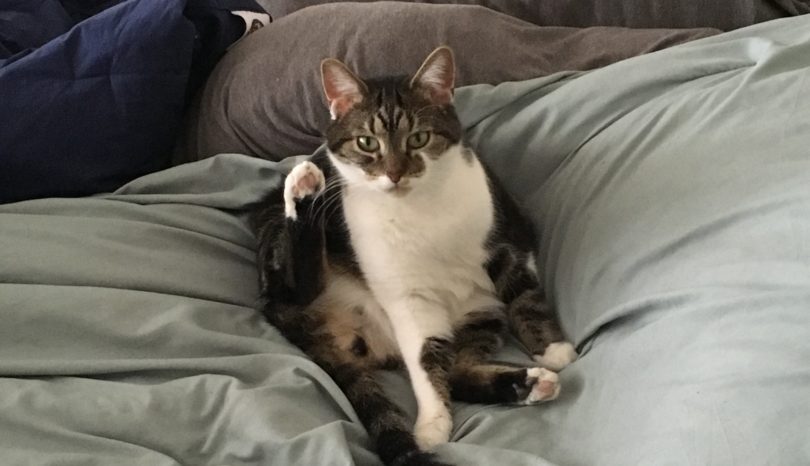 A fact about me: I don’t do my clearest thinking during the wee hours of the morning. Another fact about me: the cats’ general presence absolutely had a negative impact on my critical thinking skills. Put the two together—groggy, early-morning thoughts and cats being cats—and you get this gem:

One morning, I unintentionally woke up around 4:30am when I tried to roll over in my sleep and found that something—more specifically. Albie—was blocking my path. It happened to be the first time that I ever woke up during the night and saw that Albie was actually sleeping; conveniently, he had positioned his sleeping self right next to my knees for a nap, therefore preventing me from tossing and turning as I pleased.

As I grumbled to myself about Albie’s general Albie-ness, I decided there was nothing wrong with waking him up and removing him from my bed; once he was gone, I figured that I’d be able to get back to shifting in my sleep without fur-covered obstacles. I gave him a little nudge, which was typically all it took to get one of the dozing cats to move. In that moment, though, the nudge did nothing and Albie stayed asleep on top of my blanket. Still groggy and grumbling, I yanked the blanket with the hope that Albie would awaken when he realized that the “ground” was moving beneath him. The result was the same: Albie was still asleep.

Before continuing this story, I can’t emphasize enough that I had NEVER seen Albie sleeping at a time at which I was supposed to be sleeping myself. Even when he stopped messing with me during daylight hours for long enough to take a nap, it only took me sneezing or opening the fridge for him to wake up and glare at me for daring to sneeze or think about eating food without consulting him. Therefore, my groggy brain concluded that in that moment, there was only one obvious explanation for his behavior—and I started to freak out when I arrived at that conclusion:

It was the only thing that made sense! Albie, realizing that his final moments were approaching, wanted to curl up next to someone so he wouldn’t be cold and alone! In my anxious state, I debated lifting Albie out of my bed and placing him onto the ground in a last-ditch effort to see if he was alive, but my early-morning brain shot that down and determined that plopping a maybe-dead cat onto the ground would’ve been a very inhumane move. I tried to feel for a pulse, but I couldn’t get anything because my own heart was pounding so loudly. I then put my hands on Albie’s back to figure out if his body had gotten cold, but my palms were too nervous and sweaty to determine whether Albie’s body was a normal temperature.

In the time it took for me to not move Albie, not find his pulse, and not figure out if his body had grown cold, the cat still didn’t move. Panicked, a string of questions began rushing into my mind: What does my work schedule look like for the day? Could I take the morning off and take Albie to the vet? Is that what you’re supposed to do with dead cats? Take them to the vet? How would I get him there? I wasn’t provided with cat carrier of any kind when Henry and Albie moved in—should I run to the pet store, buy one, and then transport dead Albie to the vet? Or should I save money and carry him in any cardboard box that I happened to have in my apartment? Or would that be insensitive? What if someone realized that I was carrying a dead cat in a cardboard box out of my apartment? Also, how the heck did Albie die? He was sniffing around at something on my kitchen floor last night…did he eat something that he shouldn’t have? Maybe my fridge is leaking and Albie started drinking its poisonous fluids? How do I break this to my sister?!?

And then—just as I was about to circle back to the question of whether it was necessary to buy a cat carrier for a dead cat—Albie opened his eyes. He glanced at me, alive and unamused, and then casually hopped off my bed to get back to his normal nighttime activities.

I started back at him, wide-eyed, as an enormous wave of relief came over me and I realized that the only cats in my apartment were of the not-dead variety.