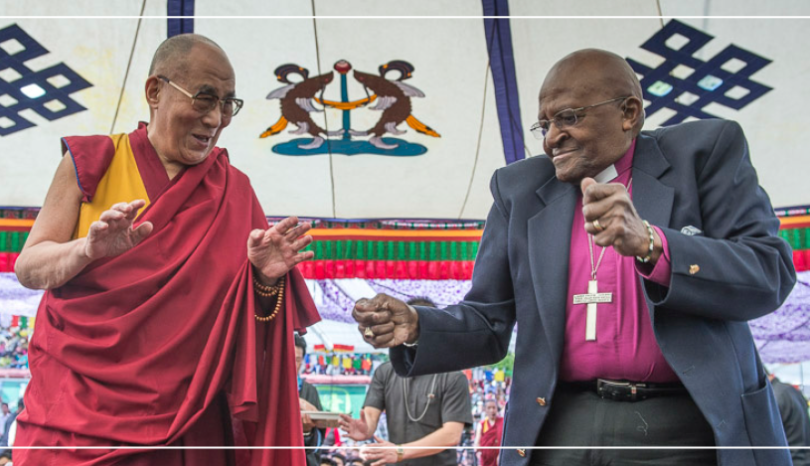 Reading The Book of Joy was like being invited to a party with amazing celebrities that you wish were your friends, but just standing there awkwardly and admiring them because they’re too amazing for words. In fact, that’s probably exactly what Douglas Abrams felt like when he was interviewing the Dalai Lama and Archbishop Desmond Tutu.

I’m still in awe of these two men, even more than the book itself. But the book was my porthole into the lives of the wise and joyful. I loved reading about the friendship between these two religious leaders: an eighty year old monk who is globally known for his universal message of love, but exiled from his own home, and an eighty something Christian leader who actively opposed apartheid in South Africa and promoted peace in the time following. They’ve come together under challenging circumstances to celebrate the Dalai Lama’s eightieth birthday, but since celebration isn’t enough, they’ve also come together to share their recipe for joy.

There are a lot of pages in The Book of Joy, but my favorite to read were those that simply described the great friendship between these two men. Two very devout men who are serious about their faith, but extremely lighthearted about life. The walls often created by opposing religious beliefs are demolished in the presence of their loving spirits. These men laugh, they joke, they tease, they kid, and they even steal each others’ caps. I want to be their friend, so bad.

They talk business, they cry, they joke, they compliment each other, they contradict each other, they joke some more, but mostly they make spirituality fun. And the pictures in the book, oh the pictures make this book so sweet. Pictures of them holding hands, laughing, and even dancing. So often we elevate leaders on a pedestal expecting them to renounce the joys of friendship, attachment, and humor, yet these things are the very substance that make them great spiritual leaders.

It’s important to understand how these men experience joy so you can appreciate the stark contrast their current joy plays to their past suffering. The Archbishop has repeatedly looked death in the eye from polio at a young age to a recurrence of prostate cancer. He has bravely opposed apartheid and lived to see positive change come from his actions, but by fighting injustices, he has had to observe unimaginable despair. Meanwhile, the 14th Dalai Lama has lived the majority of his life in exile, having escaped to India after his home and position in Tibet were challenged by the Chinese government. Today he still fights to preserve Tibetan culture. Yet at eighty years old both men expend joy like a 1000 watt heat lamp.

The book takes you through a week that these two men share, recognizing each others’ traditions, discoursing on suffering and despair, and naming eight secular pillars of joy. I call them secular because they are neither Buddhist nor Christian pillars, but I instead universal rules for achieving a higher form of happiness. The pillars are perspective, humility, humor, acceptance, forgiveness, gratitude, compassion, and generosity. You almost don’t need to read the chapters on each for them to make sense. The overarching theme of this book is clear – joy comes from freeing our mind from the chains of suffering and using that strength to help others. As the Archbishop says, “our greatest joy is when we seek to do good for others.”

Doing good for others can seem hard when we’re barely bringing joy to ourselves, but there’s no need to fret. After the Archbishop and the Dalai Lama say their goodbyes, the book wraps up with practices for cultivating the eight pillars of joy. This includes meditation, writing a gratitude journal, and practicing laughing at ourselves everyday.

The Book of Joy brought me great joy. And a bit of regret. I regret that I didn’t take the opportunity to meet the 14th Dalai Lama when I had it during college. He and Archbishop Desmond Tutu are all I aspire to be, and this book made them my teachers on what to strive for to achieve my ultimate goal, pure joy.