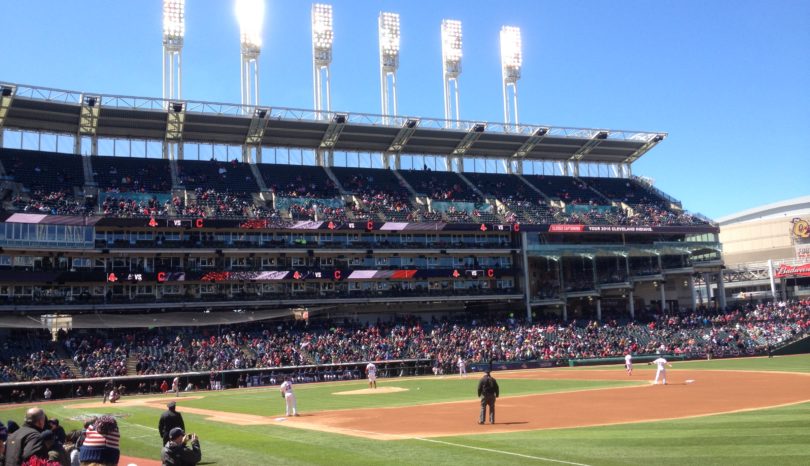 My first love’s name was Carlos.

I was six years old, smitten by both his smile and his baseball skills. Carlos was Carlos Baerga, the Cleveland Indians’ second baseman.

During the summer of 1996, he was traded away from the Tribe. I still remember the night of the trade: the news broke while my family was watching the Summer Olympics on TV. In between events, a local newscaster appeared on the screen to tell us that Carlos was headed to the New York Mets. Later that night, I cried in my room as the reality of the trade set in. My favorite player had been taken away from my favorite team. I was devastated.

That was one of the first signs that I was developing an emotional connection to baseball and to the Indians. Despite the countless heart-wrenching, stress-inducing moments that Clevelanders like myself have been subjected to, the connection has only gotten stronger in the over twenty years that have passed since the trade.

Ironically, baseball first piqued my interest for a completely non-emotional reason: the box scores in the local paper. After every game, the final score and player stats were printed in neat little columns and rows in the newspaper. On most summer days, every team in the league would play and the box scores took up an entire page of the sports section. I was—and still am—a nerd who’s oddly fascinated by collections of names and statistics. My dad, recognizing that nerdiness in me, introduced me to the box scores and the significance that each stat held. As a result, I cared about pouring over the Indians’ through-the-roof batting averages, trying to sound out Paul Assenmacher’s last name, and learning what “RBI” meant well before I even realized who Carlos Baerga was.

Once I started looking beyond the box scores, though, I quickly got swept up in the excitement of actually watching the Indians play baseball night in and night out. It didn’t hurt that the rest of the Cleveland sporting landscape was pretty bleak: the Cavs, for instance, went from playing decent basketball to being barely watchable by the end of the 90s. The Browns, thanks to Art Modell and the infamous move to Baltimore, were literally non-existent. On the other hand, the Indians were were taking the city by storm and were especially easy to root for as a little kid. Their lineup was packed with fantastic hitters who knew how good they were, as well as fielders who made bare-handed plays look easy.

On top of that, those 90s teams played like there was always, always a chance to win. Take my very first visit to Jacobs Field: the Indians found themselves losing to the Blue Jays, 8-0, within the first few innings. Our group was seated in the last row of one of the nosebleed sections. It was a sunny afternoon sometime early in the summer, but the wind in the upper deck made it feel like we were watching baseball in the middle of January. We went home early.

A few hours later, my neighbors came running over to our house to share the final score: the Indians won, 9-8.

Since then, Tribe fans have witnessed a number of similarly shocking comebacks: it’s impossible to forget events like the 2001 extra-innings win that came after erasing a 12-run deficit, Rajai Davis’s game-tying home run in Game 7 of last year’s World Series, and the late dramatics it took to extend our historic winning streak to 22 straight games last month. Those comebacks always brought me immense amounts of joy; more significantly, they helped instill a sense of optimism in me that I’ve tried to bring to all aspects of my life as I’ve gotten older…as corny as that sounds.

Then there are games like this week’s: after being chosen by the vast majority of sportscasters and reporters across the country as the favorite to win the World Series, the Indians—who had been leading the best-of-five series, 2-0—lost three straight games to the Yankees and were eliminated from this year’s playoffs. I was at the ballpark for the third of those losses; after the final out was recorded, a wave of disappointment and frustration hit me as I trudged away with 35,000 other bummed-out fans.

Then, within only a few minutes of the final out being recorded, I overheard a 40-something fan earnestly say to his friend, “Well, there’s always next year, right?”

That right there: when you’re rooting for the Indians, even with the agony that accompanies the end of something great, there’s always the sense of hope that the next batter, the next inning, the next game, the next season brings. It’s so cliche, but it’s also so Cleveland, so true in a sport like baseball, and exactly why there’s always going to be a spot in my heart for the Tribe.