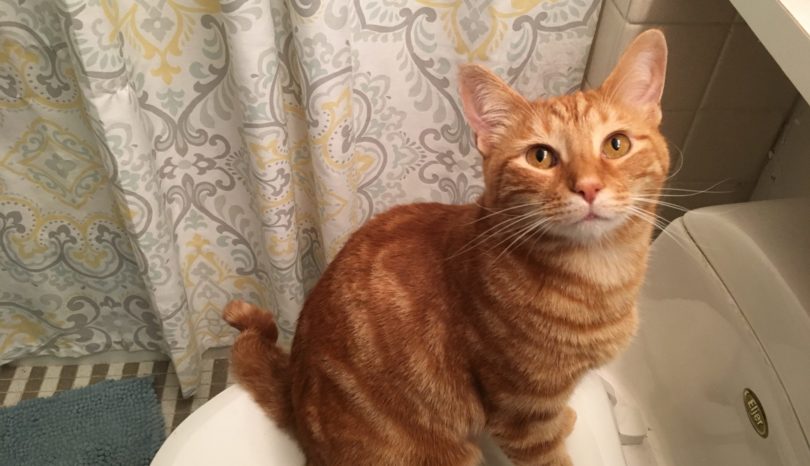 Aren’t cats supposed to be afraid of water? Maybe “afraid” is a bit much, but at the very least, I thought that all members of the breed were water-averse. Either that’s true and my sister’s are broken, or that’s a lie and cats have been fooling the better part of society for quite a while. They would.

In any event, that non-fear of water meant that Henry and Albie were eager to join me whenever I entered my bathroom. While it wasn’t a major inconvenience, their presence added a few logistical challenges to my daily routine:

*Wait, why not just close the bathroom door to keep the cats out? Backstory time: a couple years ago, I found that I couldn’t open the door one night when I tried to leave my bathroom after taking a shower; no matter how hard I tugged at the handle, the top third of the door was jammed in the doorframe. I assumed that it had swelled due to the humidity and that if I just gave it a few minutes, the door would go back to functioning normally. After spending the next ten minutes completing the rest of my pre-sleep routine (hair combing, teeth brushing, changing into the clothes that I thankfully had carried into the room with me), I tried to open the door again…and was still unsuccessful.

That’s when I went into problem-solving mode: what creative method could I use to open that sucker? A towel seemed like my most useful tool, so I tried things like wedging one in between the door and the frame so that I could quickly yank the towel back towards me, as well as tying one around the doorknob so I could put a little more muscle into tugging the handle. Not surprisingly, neither idea was successful.

At that point, it was around 12:30 in the morning (in a move that probably cost me my Millennial Card, I had my watch with me, but not my cell phone), and I was out of ideas. I started to get a little nutty, as was evidenced by my next several minutes being spent laughing hysterically at my situation, deciding that I should just sleep in my bathroom for the night, and beginning to cry as I curled up on the floor and realized that I really, really didn’t want to sleep in my bathroom.

Once several tears were shed and 1am arrived, I realized there was only one thing left to do: swallow my pride and start banging on my mirror in the hopes that my neighbor would hear me and call the building’s security guard to come help me. It took several minutes of knocking and announcing, “Hi, this is your neighbor, Becki, and I’m trapped in my bathroom,” but—in one of the greatest moments of my adult life—I finally heard a startled “Ohh!!” and confirmation that my neighbor was, in fact, calling security for me! (By the way, that was the first interaction I ever had with the quiet but lovely woman in her 70s who lives next door to me; I slipped a thank you note under her door later that week, and she wrote a note in reply that implored me to “please be careful”). Sure enough, our building’s guard was knocking at my apartment and ramming my bathroom door open in no time.

So yeah. That’s why the cats didn’t get locked out of the bathroom.