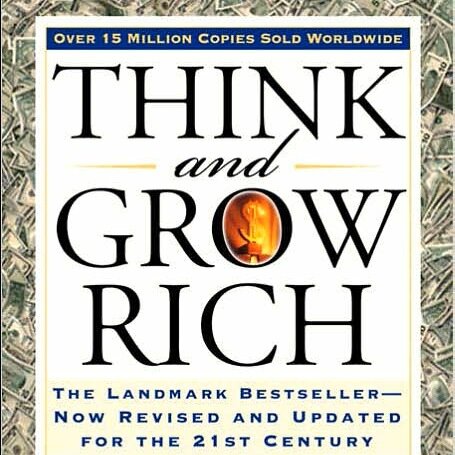 Apparently I’ve got money on my mind. After finishing Rich Dad, Poor Dad I jumped into Think and Grow Rich by Napoleon Hill and the first thing I need to say is whoa. There’s a whole lotta shit going on here.

Hill starts the book with a very compelling story. Twenty years before the book’s publication, Andrew Carnegie tasked Napoleon Hill, a reporter, with analyzing hundreds of successful people to find out what made them successful. What resulted was this book.
Now, if you’re like me, you might be thinking, “Oh, that’s interesting. Maybe we’ll get some great secondhand stories about how Carnegie, Rockefeller, Ford, Schwab, Roosevelt, and Edison became awesome.” Well, yes and no.
He spends about as much time discussing the lives of great men as he does discussing the imaginary council meetings he has with them before he goes to bed. Yes, he imagined Abraham Lincoln, Andrew Carnegie, and others sitting at a table with him giving him advice. What is funny to me is that googling Andrew Carnegie and Napoleon Hill a slew of articles debating whether not the two men actually met. Apparently, Hill’s imagination is as vivid as he says.

At this point it probably sounds like I’m totally discrediting the book, but the book has a lot of practical advice. The book can be summed up by the quote, “Riches do not respond to wishes. They respond only to definite plans, backed by definite desires, through constant persistence.” You can also get the gist of this by reading the table of contents. Desire. Faith. Imagination. Organized Planning. Decision. Persistence. And some other weird things.
I found it funny that Hill was all into making lists. Naturally, he has a method for manifesting riches, but there’s also a method for building your faith, a summary of the method of building your faith, a list of dependable sources of knowledge, a review of the qualities of a leader, a questionnaire for self-analysis, symptoms of a weakness of persistence, and I can go on and on.
Perhaps this is what frustrated me most out of the book. Instead of providing a single formula for getting riches, he just dumps a bunch of information in your lap and says, “figure it out.”
Maybe the book would’ve been better as a pamphlet or a reference guide. Like, skip to chapter 5 to learn how to get any job you want. Skip to chapter 8 for a great summary of how America became a free nation. Oh, and skip to chapter 11 to learn how to have less sex and get more shit done.
I shit you not, the last part of the book was wild. He starts off all like, go after what you want, look at what these people did, and ends with, I talk to dead people and sex stifles creativity. You should probably read these chapters for yourself to get the full effect.
For me, though, the last chapter was the best chapter. I’m not entirely convinced it told me anything about how to grow rich, but it was very relatable and inspiring. He talks about six fears: the fear of poverty, the fear of criticism, the fear of ill health, the fear of losing love, the fear of old age, and the fear of death. It’s funny how some things are still the same a century later. He gets two thumbs up for talking about some real shit and providing some real advice on how to deal with it. He gets another imaginary thumb up for ending the book reflecting on the importance of conquering self. Self-reflection is my jam.
I ended the book with one major impression: the Depression sucked balls, but a few lucky motherfuckers with memorable names made millions because they wanted it bad enough, knew enough, and did enough. I’ll have to read up more on the big men of the 20th century to feel like I can relate, though.