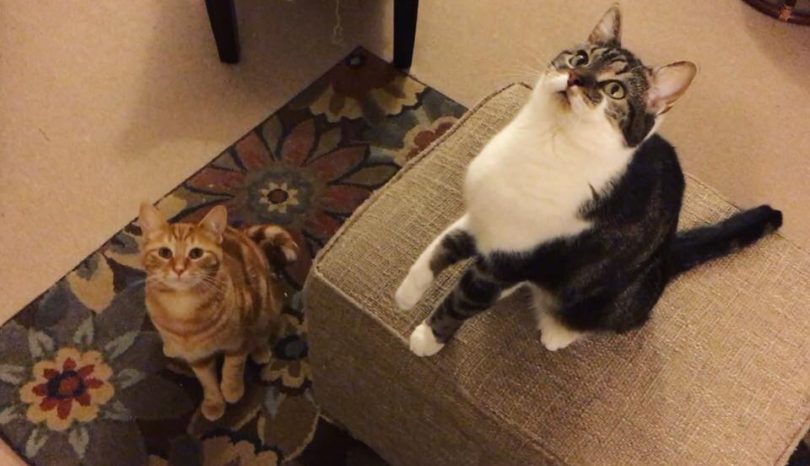 For several years, my sister’s dream had been to quit her job and embark on a 6- to 12-month period of work and travel time on the other side of the world. After months of research and years of saving money, she decided that a volunteer program in Cambodia was the perfect place to start her adventure. She bought her plane ticket, got rid of her car, put in her notice at her job, and even broke the new of her departure to our incredibly protective, incredibly Slovenian grandparents (“Vhy you vant to go dhere?”). Her dream was finally coming to fruition…with two small loose ends left to tie up.

In the time it took her to lay the groundwork for this adventure, my sister had adopted a pair of cats: Henry, an orange fellow who is a literal scaredy-cat, and Albie, a bold boy whose hobbies include trying to knock over lit candles and being a general nuisance. She somehow managed to talk a friend into long-term cat-sitting duties, but about 4 weeks before her scheduled departure, those plans fell through. Purrfect.

The result of that surprise was a stress-filled series of text messages and Facebook posts to look for new arrangements for Henry and Albie. My landlord was strictly anti-cat, my parents are both allergic (so is my sister, for that matter–not sure what that says about her sanity), and unfortunately, her messages and posts weren’t returning the results that she needed. Her time in Ohio was winding down, but her cats were still in obvious need of a home; the result of that need was me getting a text one evening that desperately asked, “Soooo, would you be willing to just sneak the cats into your apartment while I’m gone?”

Since I’m a paranoid rule-follower, I instead took that as a cue to follow up with my landlord. I again asked if my sibling’s cats could bunk with me for the next several months, trying to use phrases that I thought might coax him into accepting feline tenants: “she’s volunteering,” “not a permanent arrangement,” “very good cats,” “always use the litter box,” and others.

And shockingly, it worked.

My landlord reluctantly stated that, as long as there was a specific end date in place, my sister’s cats could move into my apartment. Despite my desire to believe that he gave in because I’m awesome at talking people into doing things that they don’t want to do, he told me that he caved because I would be doing this as a favor for my sister, and “you do whatever you need to do for family.” I suppose the important thing was that Henry and Albie had a new home, and that home was my apartment.

Towards the end of the phone call where he agreed to the cat arrangement, my landlord couldn’t stop himself from commenting, “This may be overstepping my bounds, but…do you really know what you’re getting yourself into?” I assured him that yes, it would be absolutely fine to welcome pets into my apartment.

My studio apartment where I wouldn’t have the luxury of closing a bedroom door if I wanted some distance from the cats.

Where I wouldn’t even get privacy in my bathroom because I once got stuck in there (like, bang-on-the-wall-at-midnight-until-my-neighbor-wakes-up-to-help-me stuck) and ergo will never fully close that door again.

Where I had gotten accustomed to being the only living creature in the space and had never actually owned a four-legged pet in my life, let alone two

Holy crap. Did I really know what I was getting myself into?