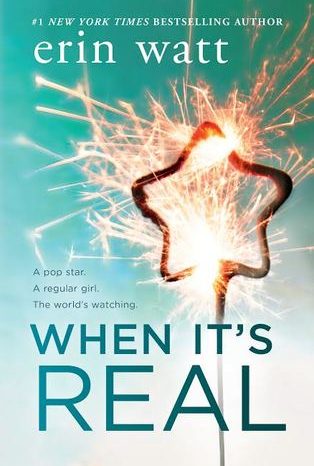 More on that book I was telling you about earlier this week, When It’s Real by Erin Watt—it was amazing. If this were a real review, I’d probably tell you about how cheesy some of the lines are, how fast the ending seemed to fly by, and how neatly they tied up the denouement. Fortunately, this is Spoiler Saturdays, so I get to talk to you about all the fun stuff.

First off, Harlequin Teen is such a wonderful, conflicting idea. I love teen romances for their innocence–if there’s a divorce, it’s just between parents, not the main characters and their ex. They’re complicated, and easier at the same time. They even have a requisite amount of smut, but they dial back on the terminology. There’s thrusting, but they don’t exactly say what. Yet and still, every time I read one of Erin Watt’s “YA” books, I imagine conservatives rolling in their graves. In Erin Watt’s stories, all the teenagers are having sex except the main character who has done everything but, and she does give up her V card by the end of the story. It’s not that it’s horribly inaccurate, it’s just something many adults would like to pretend never happens, and that parents probably won’t want their youngins thinking is the norm. For adults like myself, though, it’s great!

I should also mention that Erin Watt is a combination of two YA authors, Elle Kennedy and Jen Frederick. I got hip to them with The Royals series and probably will read everything they write. Back in high school, I used to write stories with my friends that started with a guy and a girl and ended with fighting penguins, so I often marvel at how well these stories come together. In When it’s Real there are two voices, the guy and the girl, but they still seem like one and it’s magical. I have no idea if each author took a side or if they both wrote both characters.

I personally loved seeing both sides of the story. Instead of just sharing the girl-next-door, Vaughn’s perspective, you get to see into pop icon, Oakley Ford’s mindset. Overall, it makes it much easier for you to accept the sequence of events that follows. Orphan girl and sister raise two twin brothers, sister’s company hires girl to fake-date pop star, pop star and girl antagonize each other in the worst way, pop star and girl fall in love, something challenging happens, and then they live happily ever after.

I was actually surprised by some of the turns the book took. For example, the girl was dating a lame named W and they had the opportunity to draw that plotline out, but just as I was getting sick of him, they removed him from the story. Or, or, when the pop star was feeling prideful and wanted to hide his feelings, I thought he was going to cause a giant misunderstanding Three’s Company style, but it only took a few extra minutes for him to spit it out. I appreciated these things. I even appreciated the end where the girl was given a cliche pep talk to encourage her to chase after the guy instead of wallowing for the rest of eternity. The only thing that ticked me off was the bullshit climax. I imagine the authors sitting at the table like, “there’s no way they would cheat on each other, and their parents aren’t going to cause any trouble, they’ve had enough scandals, so what can we do to break them up?” They decided to make the pop star’s staff the fall guys for the requisite drama and it was a little hard for me to stomach. I don’t have any better ideas for how to break up the most perfect couple in the nation, but you’ve gotta give me a better reason than, the staff decided to destroy the pop star emotionally because the girl was suddenly bad press.

However, nothing matters beyond the fact that When It’s Real clutched my heartstrings. I mean truly just the type of romance I love to bathe in. What type of romance, you may ask? There were a couple of cool, sweeping gestures, but those didn’t do it for me. What I loved was the romantic connection between the two main characters that became apparent from the moment they met.

Romance can’t truly exist without someone you feel strongly about. Not necessarily heart flutters, but something. Some feeling that draws you to another person without explanation. Imagine a great guy or girl who is sweet and wants to spend candlelit dinners with you. Now imagine that person is someone you feel zero attraction to, like your friend’s younger sibling. Now does that dampen the romance, or what?

Next, imagine that the great guy or girl is the person you dreamed of, but you have to play it cool. (This is something I’ve imagined many, many times.) It makes the plot a million times more interesting, doesn’t it? Wondering when they’ll stop pretending to hate each other, counting down the moments until the first kiss, watching them reconcile themselves with their emotions, and waiting for the hurricane to hit when everything finally gets all lovey-dovey. I feel like that’s what true love is. A roller coaster of emotions that ultimately is worth it. Until I’ve find mine, I’ve got to read about it. For my happily married friends…I hate you.