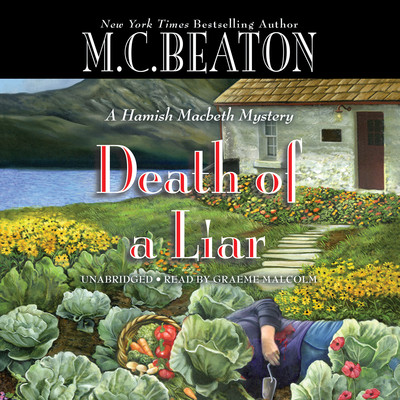 I met the character Hamish Macbeth late in his career as a lazy, romantically doomed police constable in Scotland. Having become familiar with M.C. Beaton’s Agatha Raisin series, I had an idea what to expect, but also no clue. The reasons I loved Agatha Raisin just couldn’t transfer across genders: Agatha Raisin is middle-aged yet fabulous, she stands out in a crowd, she embarrasses herself as every human occasionally does, but people underestimate her and she’s still smart as a whip, except when it comes to love. The Agatha Raisin series was a mystery series with a romantic plotline and a sense of humor. Turns out, so is the Hamish Macbeth series.

I was immediately surprised when Hamish Macbeth was described as a younger man with fiery red hair. I expected him to be a middle-aged man like Beaton’s Agatha Raisin or perhaps even later in life like Agatha Christie’s Hercule Poirot. Nope, he was a legitimate police officer with the benefits of youth, a desire to remain stationed in his current position, and two amazingly well-trained pets, a dog and cat. Based on the pets alone I took a liking to him.

At first the book read like your typical police procedural with few of the familiar ramblings about village life, gossip, and romance, but eventually, it got more exciting. In between bursts of activity, Hamish Macbeth paused to reflect on his hopes of settling down. There was the prim Priscilla, the strikingly beautiful Anka, familiar reporter Elspeth, and forensic scientist Christine. No wonder two neighborhood ladies and Macbeth’s own partner felt the need to warn off these poor ladies. Hamish didn’t womanize, but he did have a wishy-washy disposition that drove his interests from woman to woman throughout this book. (I can only imagine how complex his love life has been in the previous thirty books.)

The book is called Death of a Liar so you can probably guess what happened. If not, you definitely should be able to after reading an opening quote about the boy who cried wolf. But there are other mysterious incidents that both distract and complicate the story. Who killed the mean neighbors? Who tried to kill Macbeth? Where is the little man the old lady saw before she died? It was all very random and I must admit I became far more interested in the backstories.

I absolutely loved reading about the jealous Detective Blair. It didn’t get tired of hearing how Blair’s attempts to remove or discredit Macbeth were foiled. He was a worthy and determined nemesis, but instead of mucking things up, he was thwarted quickly and publicly, and even better, often by Macbeth himself. I cheered aloud every time! It’s a fun message about bullying and its (lack of) merits.

At the end of the story, Macbeth nearly dies trying to play hero, which reminded me a great deal of Agatha Raisin’s character, but ultimately he’s saved by his former partner, who leads another fun storyline. Early on, Macbeth convinces himself that he must be rid of his partner, Dick, but when Dick decides to run off and be a baker with the lovely Anka, Macbeth and I felt his absence. Oddly enough, Dick is still a baker at the end of the story, and Macbeth has a new partner. Fortunately, the new partner has a chance of becoming more interesting than the former.

Verdict: this series isn’t for everyone, but it’s a light fun read for anyone who doesn’t mind romance, death, and deception. Mwahahahaaaa.