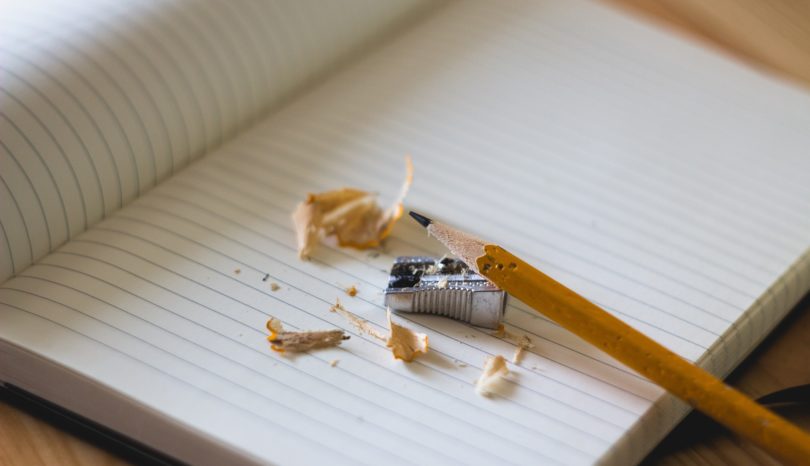 I’m reading Stephen King’s On Writing: A Memoir of the Craft and I’m really into it. Even though I can’t claim to have read a page of his other books, I can assign him the appropriate amount of reverence. He’s obviously been a big name in the business for decades, and he’s still spreading to Netflix and Idris Elba films (a whole other level of excellence). I just want to soak in everything he has to say and produce magic.

So, per his advice, I’m sitting at my desk, in my corner, trying to take writing seriously. Which means I’ve sacrificed all comforts except apple pie. The best way to abate a craving is to satisfy it, right?

Every sentence I write I feel my heartbeat quickening, my brain cranking forward like an unoiled cogwheel. If I make writing an actual habit, will my fingers start to move on their own? Or will the anxiety drag me back to my television, my head low, and the light of inspiration growing dim?

This is what it’s like when I write. He told me to take writing seriously, but perhaps I take it too seriously. Maybe I need to return to my NaNoWriMo days where I cranked out garbage but patted myself on the back because at least my garbage hit the word count to qualify for publication (shit, I forgot to set my Apple Watch to Do Not Disturb) as something more than a short story. Reading Roxane Gay’s short stories gave me hope, ironically. The stories were terribly disheartening (there goes an adverb), but it was nice to see that a bunch of short stories could be widely accepted as a complete body of work. Maybe not easy to convert to a feature film, but a bestseller nonetheless.

I want to dispute my grammar extension about a word it’s underlined, but I think I’d have to pay for premium to get a complete explanation of why they want to add “the” before garbage. Would paying $99/year for a top-tier, automated grammar checker be considered “taking writing seriously?” (I sure hope not.)

I’d like to think that the only qualifier for taking writing seriously is forcing yourself to sit down and stare at a screen to produce something, even when you know you’d rather be walking in and out of the kitchen until bedtime. It’s like you respect the craft to know that it should make you miserable before it makes you great. Isn’t that true for all worthwhile things?

I wonder what’s an acceptable limit to the number of rhetorical questions an author should write. I think I overdo it a bit, to be honest. But honestly, I have more questions than answers. This seems to be a recurring theme, which makes sense because writing is kind of an exploratory exercise for me.

I’m trying to figure out my voice, my life, and if there’s a three-headed monster chewing away at the sensible synapses in my brain.

This is page one of my memoir on writing.