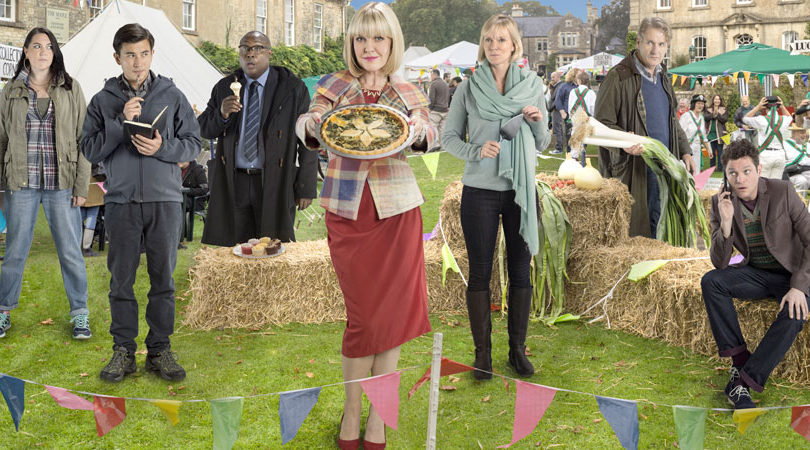 Raise your hand if you’re a fan of The Golden Girls! How about Murder, She Wrote? Now, imagine a combination of the two–a sassy, older lady with an active love life going around and solving crimes in a small village. Boom, now you’ve got Agatha Raisin.

I figured you’re probably tired of reading about all my positive/self-help/self-improvement/spiritual/new age books, so today I’m going to tell you about my favorite mystery series.

M.C. Beaton’s Agatha Raisin is a badass. This chick retired early (though not early enough to be considered young), is a beast at publicity, has an active social life, wears heels everywhere, dates enough men to make Jessica Fletcher look like a prude, and still somehow manages to solve the case.

She also doesn’t fit into with her fellow villagers, leads a band of misfits, always gets dumped by the guy, and regularly puts herself into life-threatening situations. She’s a hot mess with pizazz and I love her.

I can’t remember how I met the Agatha Raisin series, but I can tell you that I read the first 23 books in a four month period. I’ve always loved TV mysteries–Murder, She Wrote, Matlock, Perry Mason, Diagnosis Murder, Midsomer Murders–but they all lacked one very important thing: romance. Romance spices up any story for me. Get a guy and a girl who are destined, but have so much baggage they have to fight for eons before getting it together, and I’m sold. Sailor Moon is coming to mind…

Anyway, Agatha Raisin retires early from the public-relations industry and ends up in the Costwolds (a fancy name for an area in Southern England). There she gets a dashing new writer neighbor who has the emotional breadth of a kidney bean. But one great thing about Agatha is when she sets her mind on something, she gets it. Over time she woos the guy, they get married, he leaves her to become a monk, and then comes back like nothing ever happened. It would be sad if it wasn’t so hilarious, and if Agatha didn’t have options.

See, even though she’s not a spring chicken, Agatha keeps herself up. She dresses ‘smartly,’ as they would say, and can almost always be found with heels, a clean bob, and enough make-up to cover up her age. Her jackass neighbor-husband isn’t the only man in her life. She also has a rich, younger guy friend that sleeps around, but finds Agatha charming enough to develop feelings for her. By the 27th book I became less and less certain who she was meant to be with, but I’m rooting for the younger guy.

On top of her dating life, Agatha has to deal with dozens of people dying in her village. Naturally, all townspeople hate her as if she created killers. She has absolutely nothing to do with the fact psycho-murderers keep cropping up in the Cotswolds, but she does happen to be around when the dead bodies appear, and in several instances, the dead body is almost hers. If you read the titles of the books you can probably tell who’s getting murdered, but the books are no less fun to read.

Despite having retired, Agatha gets bored, and spends a lot of money trying to impress people, so she ultimately opens up a detective agency with employees young and old. Naturally, everyone on the police force hates her, too. She has enough people in her life to keep her busy, though. You’ve got Bill Wong, a police constable whose mom seriously cramps his dating life; Mrs. Margaret Bloxby, who’s the vicar’s wife and friends with everyone; Roy Silver, her queer former co-worker; Doris Simpson, Agatha’s cleaner and cat watcher; and the folks whose checks she pays.

It’s an interesting cast, so I wasn’t surprised when BBC picked the series up for television in 2014. The TV series is short and not faithful to the books so I would recommend starting with the books, even though Agatha Raisin’s story is still being written. The series is almost as old as I am, and yet M.C. Beaton still cranks out a new story every year. But maybe that excites you like an unfinished fan fiction. Regardless, I encourage you to dive in to the series, and if you’re nice, I might lend you a copy.